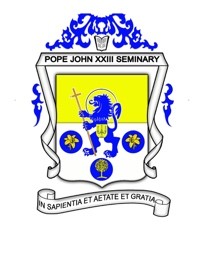 In 1583, the Council of Trent, through the efforts of St. Charles Borromeo, decreed the creation of a seminary, a place of formation where young men train for the priesthood. The Pope John XXIII Seminary shares a common history and heritage as Seminario Mayor de San Carlos and San Carlos Seminary College. The Cebu Archdiocesan Seminaries trace their origins to the Seminario-Conciliar de San Carlos, founded by Bishop Mateo Joaquin Rubio de Arevalo on October 25, 1779 in the abandoned building of the Jesuit mission house of Colegio de San Ildefonso (near Plaza de Armas, now Plaza Independencia) along Calle Enrile-Serrano (now M.J. Cuenco Avenue) that existed from 1595 until the departure of the Jesuits in 1769. Bishop Pedro Agurto, OSA was the incumbent bishop of Cebu when the Jesuits established the Colegio in Cebu on August 21, 1595. In the Jesuit Constitution, a colegio is a Jesuit residence with a school for the Jesuit Scholastics. The colegio in Cebu did not yet achieve full Jesuit colegio credentials since there were no resident Scholastics yet who studied at the Colegio. Instead, the colegio served as a residence of Jesuits who wanted to refresh and relax from the heavy demands of their mission areas. By 1597, the mission house acquired its colegio stature and was formally dedicated under the patronage of San Ildefonso.

A School for Native Young Boys

Through the efforts of Bishop Agurto, Vicente Puche, a Jesuit Scholastic, was able to teach Latinity in 1598 and the students were able to present a Latin and Castellan drama in that year as a form of gratitude to the bishop. Attached to the Jesuit mission house was a “reading and writing” school for native young boys. Classes for grammar were done for an hour in the morning and another hour in the afternoon since the colegio served as a day-school only and not a seminary nor a boarding school for students. Meanwhile, the Anti-Jesuit movement during this time took a turn for the worst. The Enlightenment period, most of all, resulted in the suppression of the Jesuits as well as their eventual expulsion from their various missions belonging to those they had antagonized. The sad fate of the Jesuits following their banishment from Spain and its dominions was a great loss to the young men of the Diocese of Cebu.

The Establishment of Seminario-Conciliar among Spanish Territories

In 1777, Bishop Rubio de Arevalo petitioned King Charles III for the land and building of the former Jesuit mission. The King of Spain granted the request in a Royal Cedula dated October 29, 1779. On August 23, 1783, the Royal Audiencia of Cebu conformed to the Royal Cedula and turned over the property to the Bishop of Cebu, who erected therein a diocesan seminary named Real Seminario de San Carlos in honor of the King of Spain Charles III and of St. Charles Borromeo.

When the reforms of the Council of Trent were implemented, the diocesan seminary became the Seminario-Conciliar de San Carlos. The Council had emphasized the training of young men destined for the priesthood “from its tender years, unto piety and religion, before habits of vice have taken possession of the whole man.” This provision institutionalized what would be known as the Minor Seminary. The Menores and the Mayores lived in one building but they were not allowed to mingle with each other, mindful of the two distinct ranges of seminary formation.

The seminary was administered by diocesan priests and it continued until 1852 when the Dominican Fathers arrived to teach and become Regent of Studies of the seminary together with other lay teachers led by Bishop Romualdo Jimeno, OP. The diocesan clergy at that time was not able to handle the educational needs of the seminary since most priests were assigned in parishes and diocesan offices. In 1863, Bishop Jimeno invited the priests of the Congregation of the Missions (CM) to take over the seminary administration. The request of the bishop was granted by Fr. Mariano Joaquin Maller, CM, the provincial-superior of the Vincentian missions. In 1866, Padre Casarramona arrived in Cebu together with three sisters from the Daughters of Charity and made contract with the bishop to take over the administration of the seminary. On January 23, 1867, the Vincentians officially administered the seminary. The strictness and the form of discipline by the Vincentians brought a great progress to the academic standards of the seminary. That same year, the people of Cebu, conscious of the value of Catholic education, petitioned Bishop Jimeno that the instruction of the Vincentians be extended to their children. Bishop Jimeno consented and, through a pastoral letter, announced that the seminary was open to all, even to those who might not be aspiring for the priesthood. It was on May 15, 1867 when the decree was issued and it was on July 1, 1867 when Padre Casarramona welcomed the externos to the seminary. Thus, the Seminario-Colegio de San Carlos was born. It continued growing until in 1891, it was incorporated into the University of Santo Tomas as a private college, offering a five-year course leading to the degree of Bachelor of Arts for seminarians and lay students alike.

During the Philippine Revolution and the Philippine-American War, the population of the Seminario-Colegio dwindled. The seminary’s infirmary served as hospital for wounded soldiers and its students became volunteers in burying dead soldiers. Things worsened and the seminary together with the Palacio Episcopal and Fuerte de San Pedro, became an evacuation center for Spanish troops and Loyalist. However, as matters began to settle, the Seminario-Colegio was able to rebuild itself up until it received government recognition in 1912. Among the famous personages who graduated at the Seminario-Colegio de San Carlos were Don Sergio Osmena, Don Paulino Gullas, Don Agustin Tumulak, Don Dionisio Jakosalem, Don Vicente Sotto, Don Vicente Rama and Bishop Jose Maria Cuenco.

An Institution Exclusive for the Training of Priests

On 1 August 1922, Pope Pius XI intervened in the issue of having externos studying with the internos and decreed in his “Officiorum Omnium” that “seminaries should be used only… for the training of priests… Therefore, boys and youths who have no intention of being priests should not be admitted.” Thus in 1924, the Colegio was separated from the Seminario although both continued being housed within the same building (Martires Street). In 1930, the new Colegio de San Carlos building was ready and later in 1932, the Colegio de San Carlos moved to P. del Rosario Street, and in 1934, it was turned over to the Society of the Divine Word since the Vincentians wanted to focus only on the formation of seminarians. In 1948, the Colegio de San Carlos was granted the status of a university. Hence, the University of San Carlos as it is now formally recognized today.

At the start of the Second World War, the seminary closed. However, in 1943, classes resumed for the Menores in the parish convent of San Miguel Arcangel in Argao while the Mayores rented a house in nearby Sibonga. During the Liberation of Cebu in 1945, the old seminary building along Martires Street was completely destroyed. The Archbishop of Cebu Gabriel Reyes worked hard so that a new seminary building could be constructed in Mabolo.

A Seminary in Memory of “the Good Pope”

In 1969, the Padres Paules turned over their administration of the seminary to the diocesan clergy led by Msgr. Alberto Belarmino. The change of administration also occasioned a new name for the minor seminary. Hence, the name, Pope John XXIII Minor Seminary, in honor of “the Good Pope” John XXIII (Angelo Giuseppe Roncalli), of happy memory. Since then the following diocesan priests have served as rectors: Fr. Adelito Abella (1974–1977), Fr. Leopoldo Tumulak (1977–1986), Fr. Romualdo Kintanar (1986–1994), Fr. A. G. Elias Matarlo (1994–2002), Fr. Alfredo Romanillos, Jr. (2002–2011), Fr. Benedicto John Sarchez (2011–2016), Fr. Eligio Suico (2016–2018), and Fr. Allan Delima (2018–present). In 1986, the Song of the Seed, a culmination song of the graduating batch of that year, was first heard in the hallowed walls of the seminary. Since then, it’s singing was incorporated in school-initiated activities, eventually becoming the school hymn of the seminary which continues to echo today.

Being a formative community, the Pope John XXIII Seminary continues to nurture the seeds of vocation in the persons of the adolescents, preparing them as future priests but also as good Christians now. From its esteemed tradition and rich history, the school through the years have seen many a generation now of timid boys growing into gallant men, capable and eager to pursue their vocations in life. Today, the high school seminary, in its present home, continues to weave new memories as its sons grow in sapientia, aetate, et gratia.

Alcoseba, Cesar. “The Admirable Work of the Vincentians of Cebu: From 1867 to 1950” in Recuerdos. Cebu: Priest-Alumni of the Diocesan Seminaries, 1997.