500 YEARS OF CHRISTIANITY IN PH – Papal nuncio to Pinoys: ‘Shine on world with Christ’s light’ 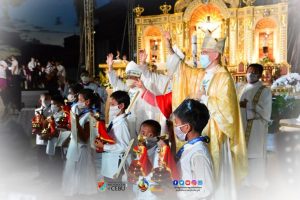 CEBU CITY—Close to sundown on a warm, sometimes rainy day, with the administration of baptism and first communion to seven children, the Archdiocese of Cebu crowned its opening of the 500th anniversary of Christianity’s arrival in the Philippines.

“How beautiful it is that today we celebrate what happened 500 years ago by doing exactly the same thing that Father Pedro de Valderrama did. We will baptize,” Archbishop Charles Brown, apostolic nuncio to the Philippines said at Mass on 14 April 2021.

The date marked five centuries since Father Valderrama, chaplain of Magellan’s expedition conducted the first baptisms in Cebu. Back then, around 800 natives had joined the Catholic Church, led by their king and queen—Humabon and Humahay—who respectively took the Christian names Carlos and Juana. Catholics from the Philippines the world over celebrate the quincentenary of the introduction of Christianity to the country from 4 April 2021 to 22 April 2022.

Standing by a specially-made altar with a reredos housing images of the crucified Christ and the first canonized Filipinos—Lorenzo Ruiz and Pedro Calungsod—he reminded the faithful that they have been enlightened by Christ.

“Walk always as children of the light and keep the flame of faith alive in your hearts,” he said, quoting the Catholic rite of baptism. “When the Lord comes, may you go out to meet him with all the saints in the heavenly kingdom.”

They wore vestments bearing symbolic embroidery that called to mind the celebrated 500 years, the oceans crossed by the evangelizers of the Philippines, the Santo Niño, and the Holy Trinity. The design was conceptualized by Jesuit Fr. Jose Quilongquilong.

A chorale and an orchestra rendered most liturgical songs Cebuano and in Latin, the Catholic Church’s official language. Readers offered the prayers of the faithful in Philippine languages including Cebuano, English, Tagalog, Waray-waray, and Hiligaynon.

The nuncio underscored Philippine culture’s impact on worldwide Catholicism in expressions of piety such as Misas de Gallo (celebrations of Mass at dawn on the nine days before Christmas) and veneration of the Santo Niño, a statue of the Child Jesus.

“The Catholic faith cannot be identified with any single culture; it is rather the life-giving truth of God,” he said, “that can be embraced by any culture and, with time, will transform that culture so that—as here in the Philippines—that culture will give its own particular expression to the Catholic faith.”

In 1521, Antonio Pigafetta, the Magellanic expedition’s Venetian chronicler had given the Santo Niño to Queen Juana as a baptismal present. It is kept in a marble chapel in the Basilica Minore del Santo Niño in this city by friars of the Order of Saint Augustine.

Archbishop Brown noted that in the tradition of Queen Juana’s joyful dance upon accepting the Holy Child, Filipinos migrants today spread the Catholic faith and devotion to the Santo Niño around the world.

Echoing Pigafetta’s act of gift-giving, he gave each newly baptized child a small image of the Santo Niño.

He also incensed the Cross in the kiosk and the images of the Blessed Virgin Mary under the title “Our Lady of Guadalupe of Cebu,” Saint Joseph, and Santo Niño. The congregation sang the devotional “Gozos (Joys)” for the Holy Child, better known as “Batobalani sa Gugma (Magnet of Love),” waving their arms as they did so.

“The Santo Niño reminds us ‘of the hidden life of the Holy Family in Nazareth. Mary and Joseph raised the Child Jesus with love. By opening the doors of your families to the Holy Child, you too will be able to transmit to your children the faith that you received from your parents,’” Archbishop Brown had said in his homily, quoting Pope Francis.

Cardinal Quevedo encouraged Cebuanos, as citizens of what he called “point zero” of the Christian faith in the Philippines to share it with others, not by preaching in the streets but by living their lives well.

With his final benediction, Archbishop Brown imparted a plenary indulgence to everyone who attended the Mass. The plenary indulgence cancels all temporal punishment attached to forgiven sins. It is gained through completion of the indulgenced act, detachment from all sin including venial ones, sacramental confession, reception of the Holy Eucharist, and prayer for the intentions of the Pope.

As the crowd shouted the salutation “Viva! Pit Señor” after Mass, the award-winning Sandiego Dance Company that reenacted the first baptism and the presentation of the Santo Niño performed another Sinulog or prayer dance to the Holy Child.

The number of Mass attendees was limited to 700 to ensure physical distancing in the plaza amid the covid-19 pandemic, the end of which Archbishop Palma exhorted the faithful to pray for as he welcomed Catholics, other Christians, and people from other religions to the celebration.

*Jason A. Baguia is a member of the Digital Communications Program of the Archdiocese of Cebu. An editor who has covered Church affairs since 2002, he heads the faculty of the baccalaureate degree program in Communication at the University of the Philippines Cebu